This post contains affiliate links, which means if you click a link I may receive a commission at no cost to you. All opinions are my own.

I had the privilege of taking a  grown up gap year to travel.

Yes, I’m Team Quit Your Job. I visited 12 countries over 12 months from France to Japan. Since I got home in September, people always ask me “Which country was your favorite?” I usually give a long answer, because I figure they’re only asking so they can get some travel ideas of their own. And different people have different travel preferences. I’m a museum junkie, but I had a “friend” who LOL’d when I told her my trip plans included museum time. I’ve even heard of people who don’t like beaches.

Normally, I’d say that the Philippines had the most beautiful islands, Vietnam had the best food, Australia had the best beach towns, Cambodia had the best cultural attractions and Budapest, Hungary was the prettiest city. 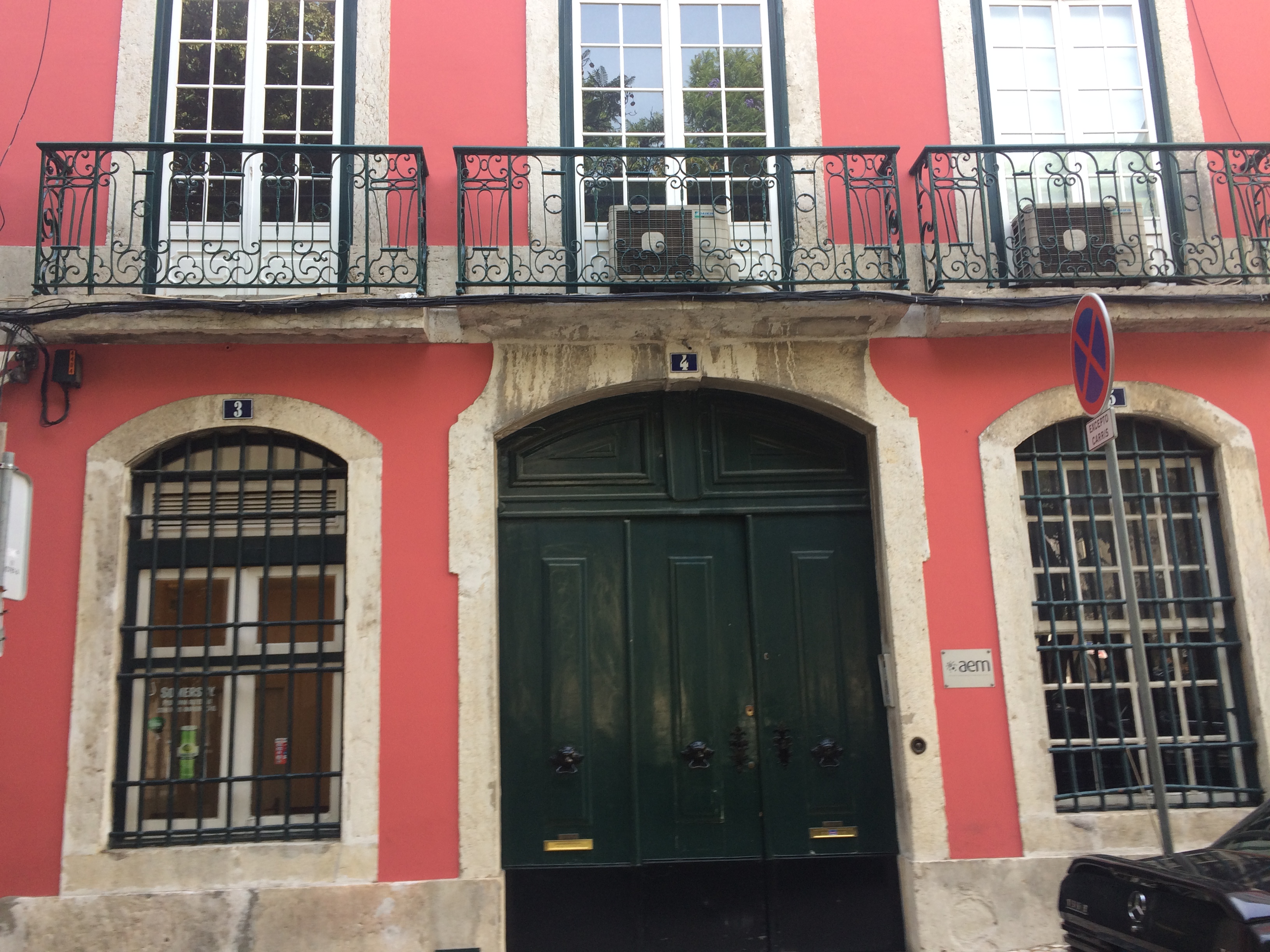 There. I covered all the travel bases. Whatever you’re into, you have a place to start Googling and Pinning.

Yes, I love giving the long-winded answer so people can be inspired to check out places they may not have been considering. And who doesn’t like to talk about their trips when they get back home? I definitely do! That’s why I have a travel blog. But I’ll try to be less obnoxious than your co-worker who talked for months about his trip to Italy and how you’ve never had pizza until you eaten it in Napoli.

But wait…there’s an easier answer. And because you’re my favorite Travel Buddy, I’ll tell you my secret.

Portugal was my favorite destination. It wins every category in one reasonably priced, holiday-sized package. Yes, really!

Get yourself prepped for Portugal!

1. Portugal Has Gorgeous Islands and Beaches…and 300 Day of Sunshine.

I haven’t yet visited the Azores, because I assumed it would be too expensive to fly there from Lisbon. WRONG! Round-trip flights from Lisbon to Ponta Delgada are as low as $120 USD. And accommodation on the island is on par with mainland prices. Even on my hilariously-small backpacker budget, I could’ve swung this. I also didn’t get to the showstopper of Portugal beaches on the Algarve peninsula. I was rushed for time and almost broke by the time I got to Portugal.

But I did see dynamite beaches up and down the coast. The sand was gorgeous and powdery with miles of boardwalks. 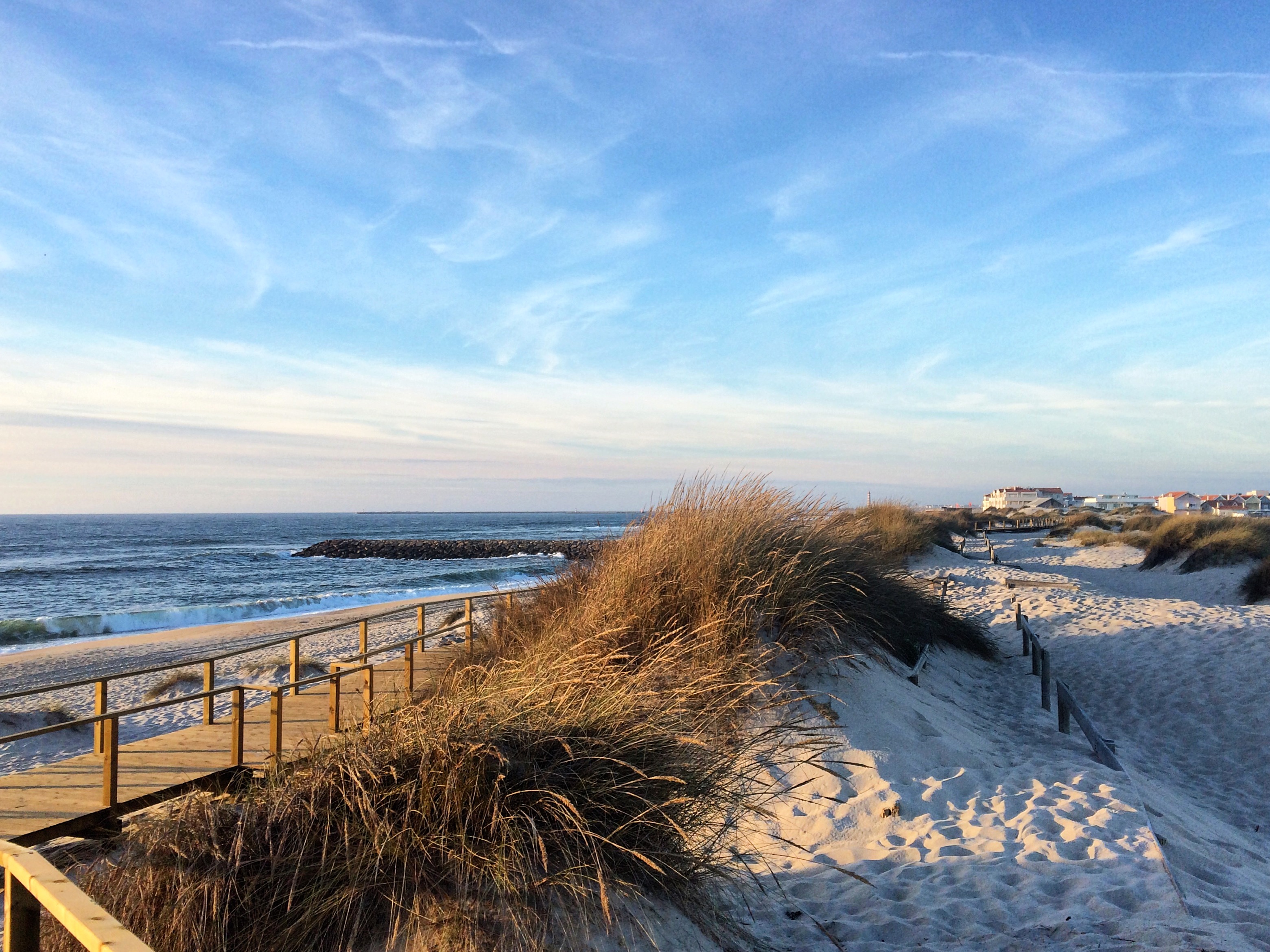 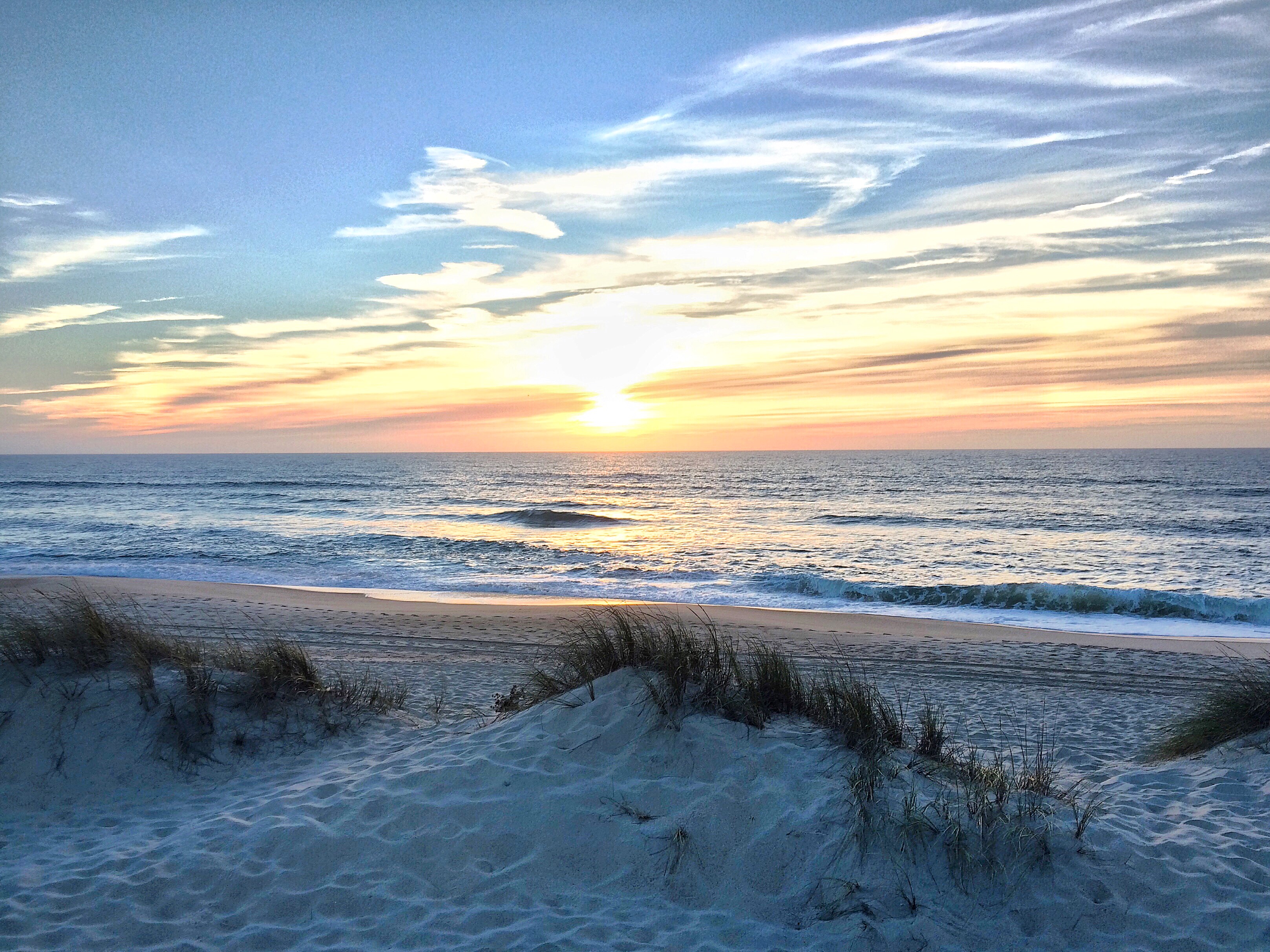 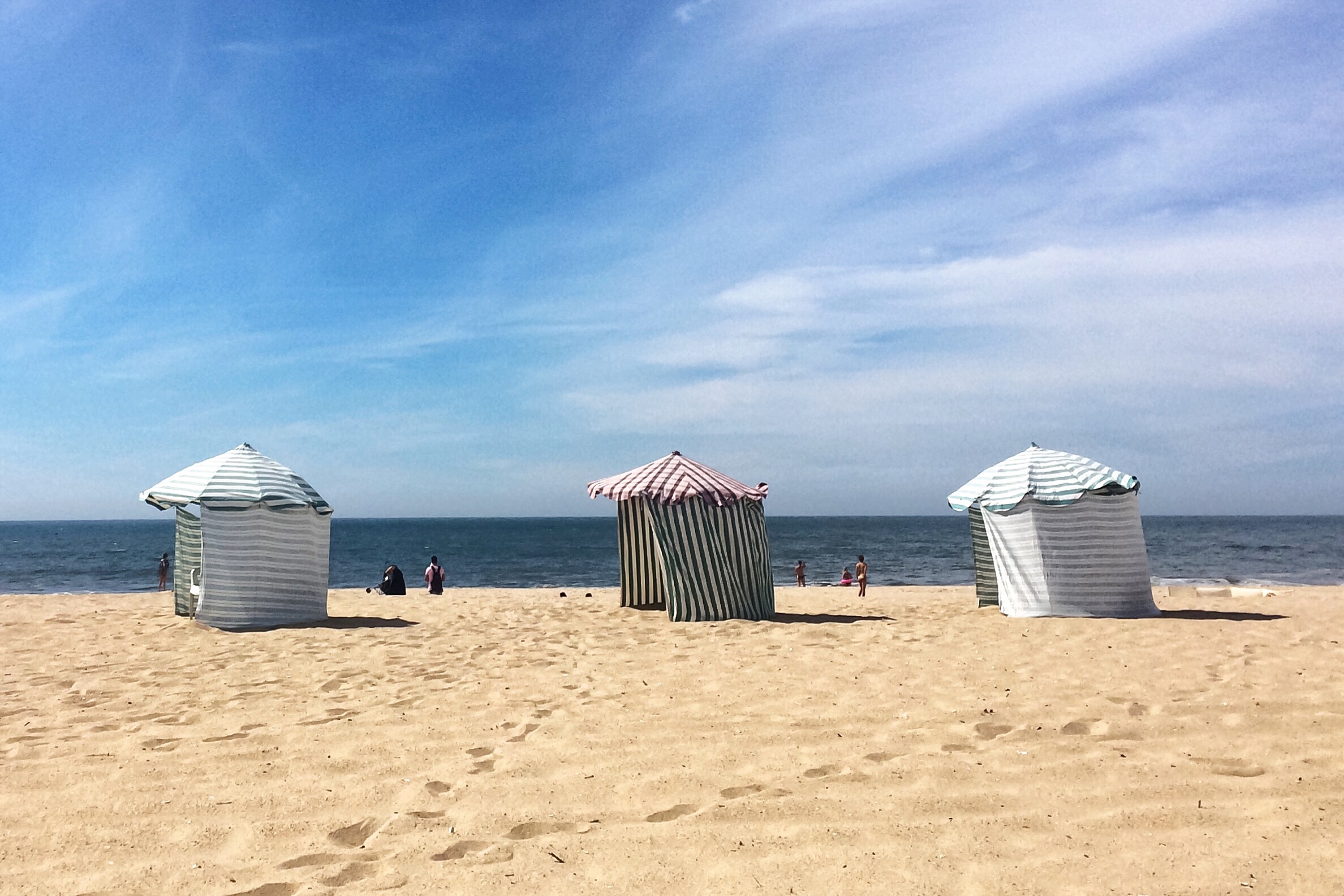 These pictures are from Praia Costa Nova near Aveiro, Portugal,  midway between Coimbra and Porto.

Food-wise, Portugal is the Delaware of Europe. Don’t laugh! I’m a proud Delawarean, and our food is one of our best assets. Delaware is where Maryland crabcake territory meets the the home of the Philadelphia Cheesesteak. In Delaware you won’t go hungry.

The same’s true for Portugal. I ate my weight in Bacalhau à Brás (cod with potatoes casserole) and meat croquettes.  I spent less than 10 Euros for each meal without even searching for the cheapest places.

Do you prefer seafood or steak? Inexpensive wine or inexpensive beer? Doesn’t matter. You’ll love Portugal. (Although Port wine — Portugal’s pride and joy — is not my fave.)  And that’s before you even try the pastéis de nata. This is a super-delicious custard tart. AND IT’S BREAKFAST! I always ate mine too quickly to take a picture. I ain’t sorry. 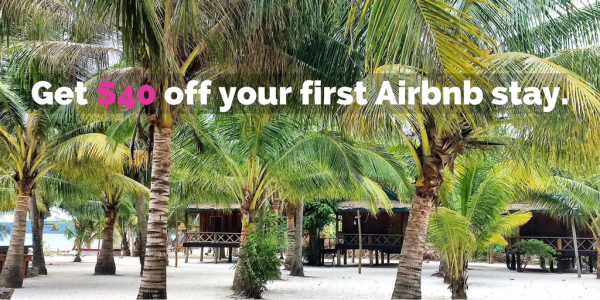 GET $40 OFF YOUR FIRST STAY WITH AIRBNB!

3. The Cities are Beautiful.

Here’s something I learned during my travels. All sunsets are not created equal. Smog and cloud cover robs Vietnam of the stunning sunset show their neighbors in the Philippines get to watch every day.

Portugal is sunset central. And they know it. It’s like they intentionally painted and tiled their buildings to reflect that glow. In both Lisbon in the south and Porto in the north, people took the time to stop and watch the sunset like we’d watch a baseball game. I went to a lookout in Lisbon called Miradouro de São Pedro de Alcântara that had live music at sunset. And the view was spectacular. 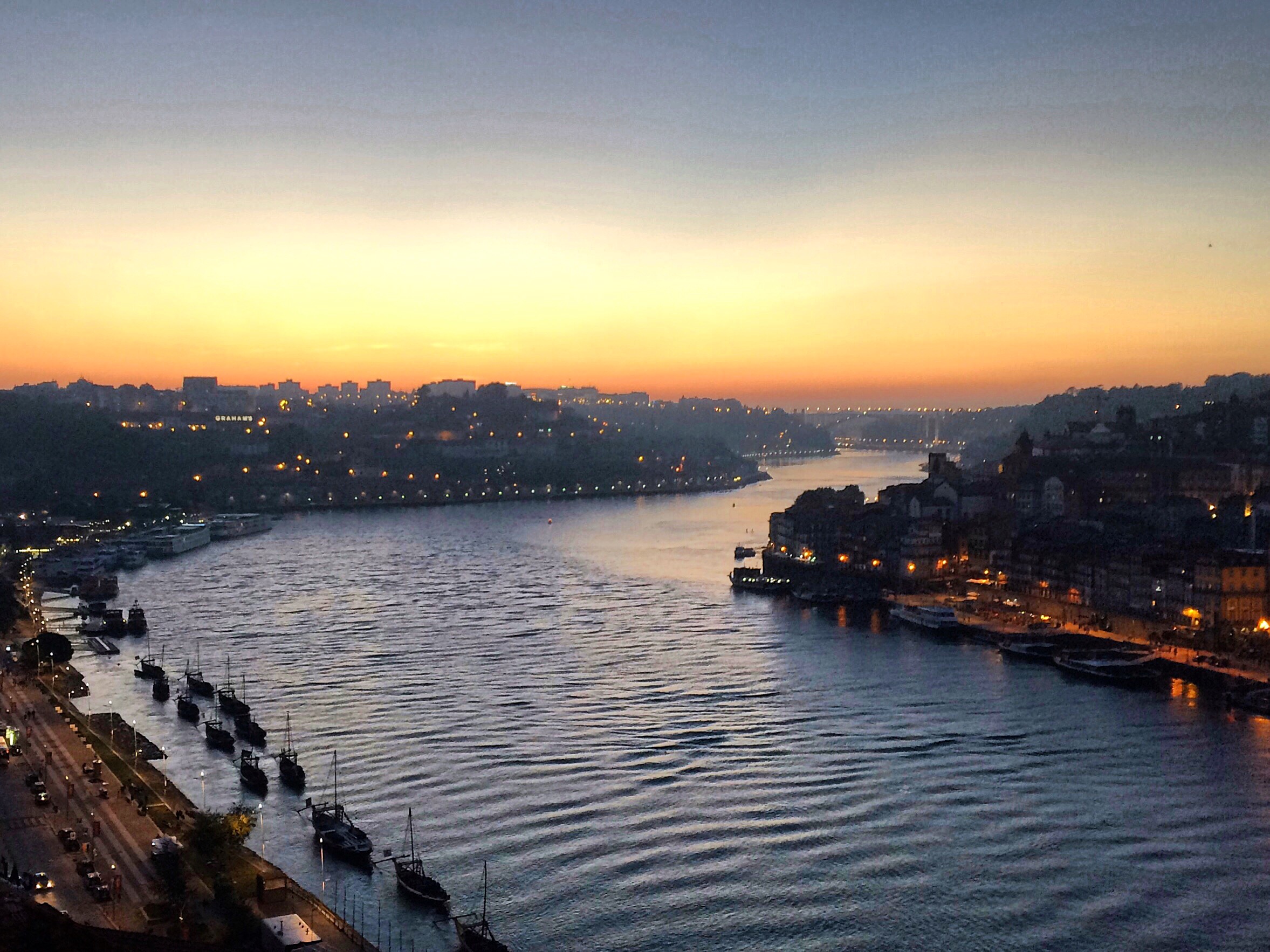 Sunset at the beach was ok too.  🙂 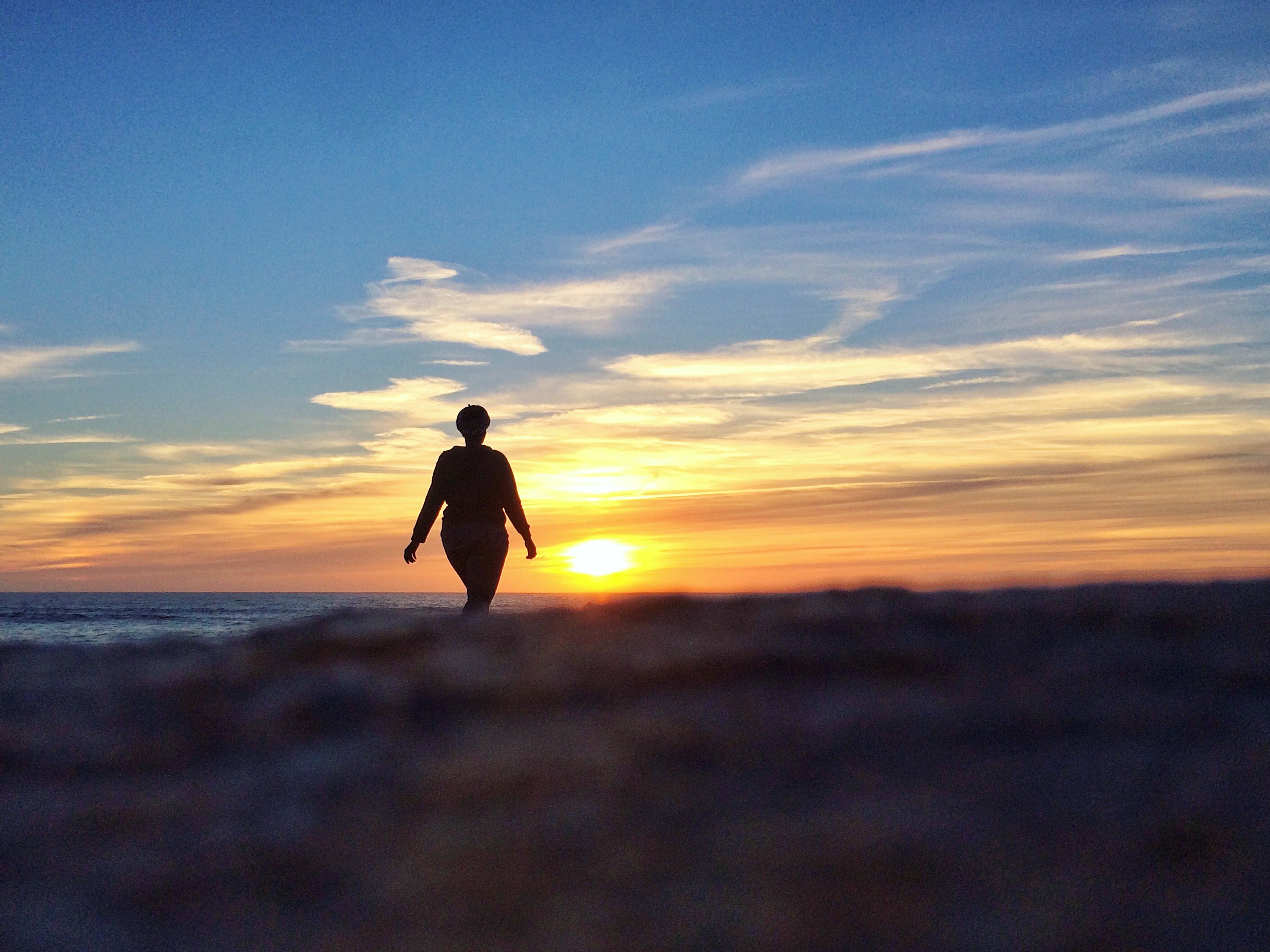 See stunning sunrise pictures from around the world.

Every time I visit a city outside of the US, I’m surprised by how clean it is. Except for that dirty city which shall remain nameless. Ok, it’s Manila.

But Portugal’s cities aren’t just clean, they’re lovely. The Portuguese tile the outside of buildings in the most beautiful azulejos (tiles). It’ll have you just snapping pictures of random homes until you battery dies. 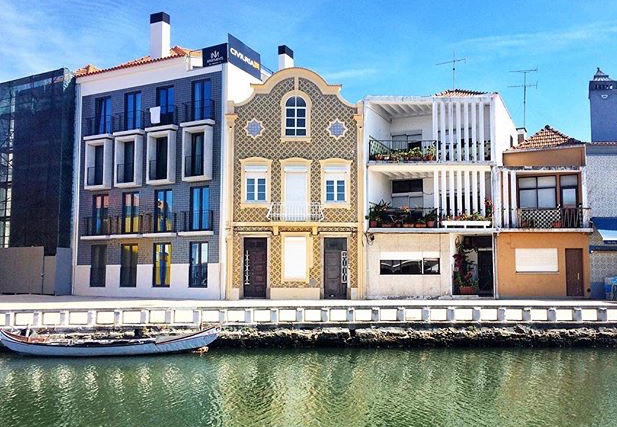 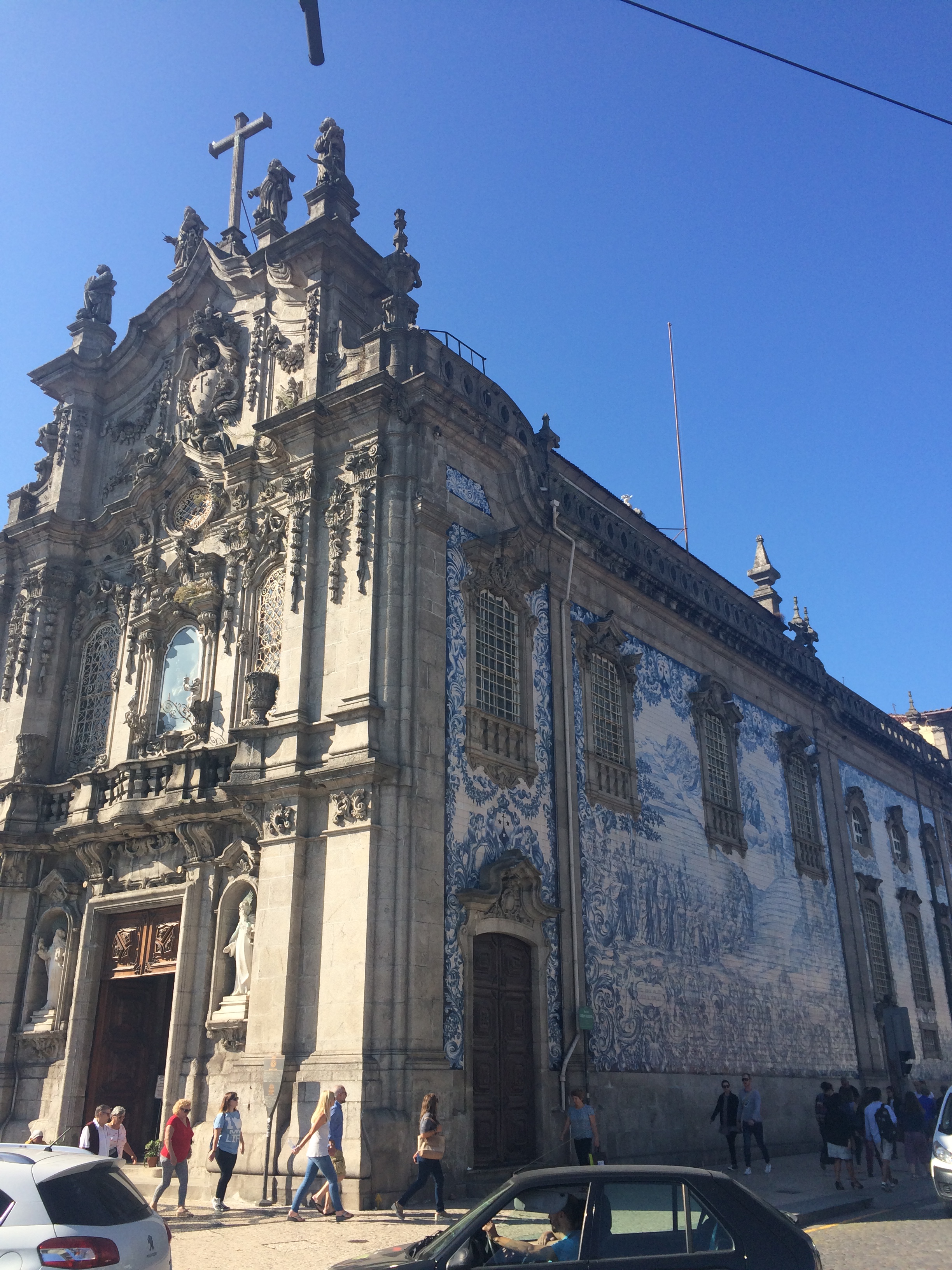 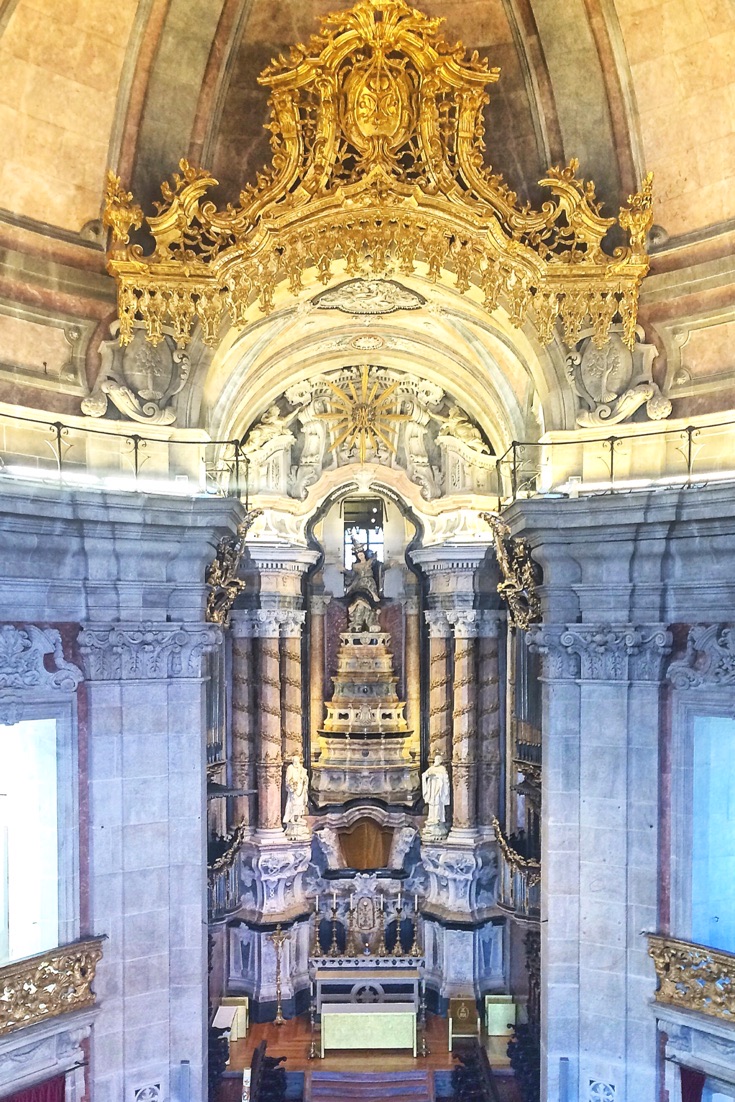 Portugal is serious about its adornment. And it doesn’t stop with tile. The town of Águeda had the coolest street art. Umbrellas in the sky! 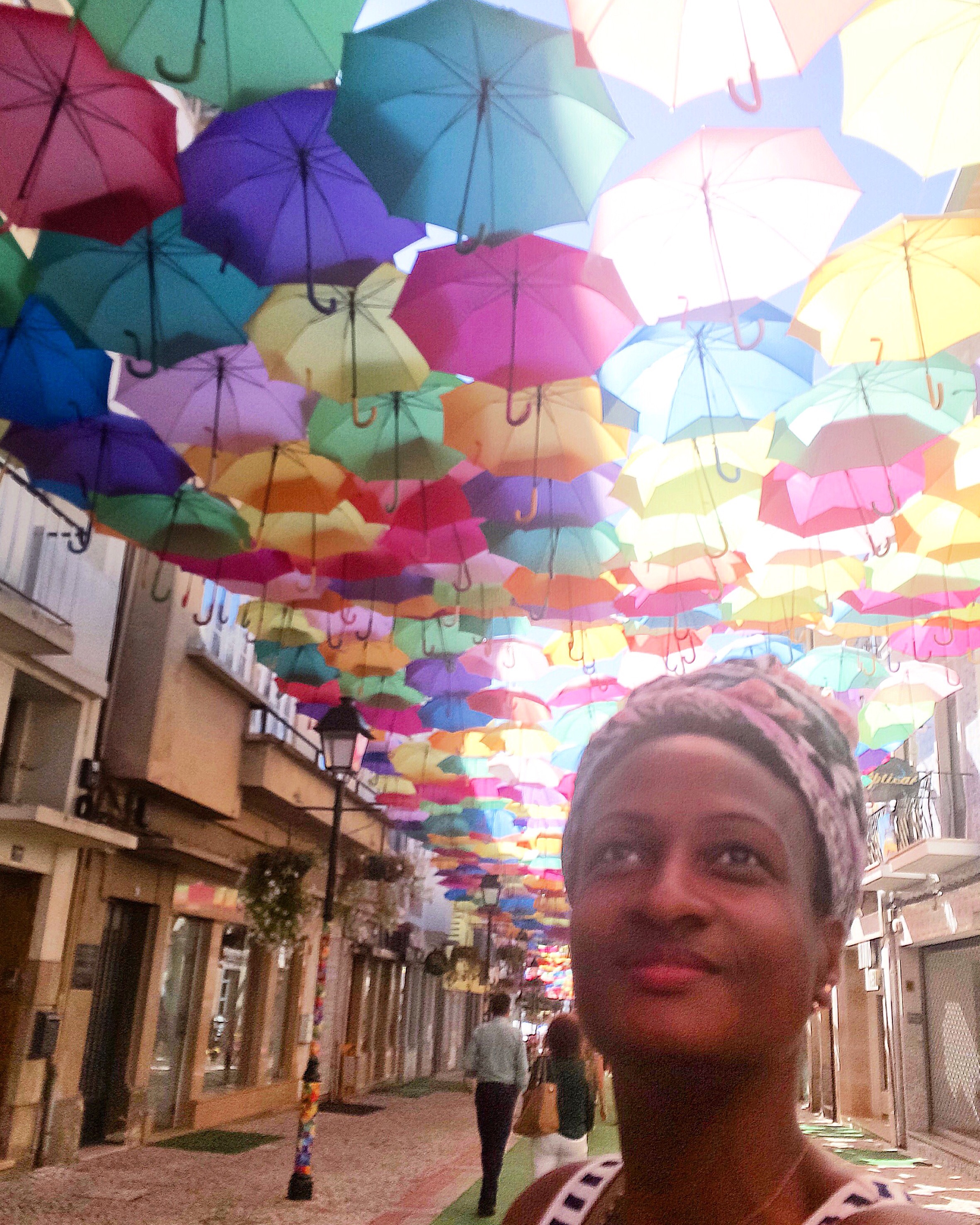 Portugual is super hilly. So why not rainbow steps! 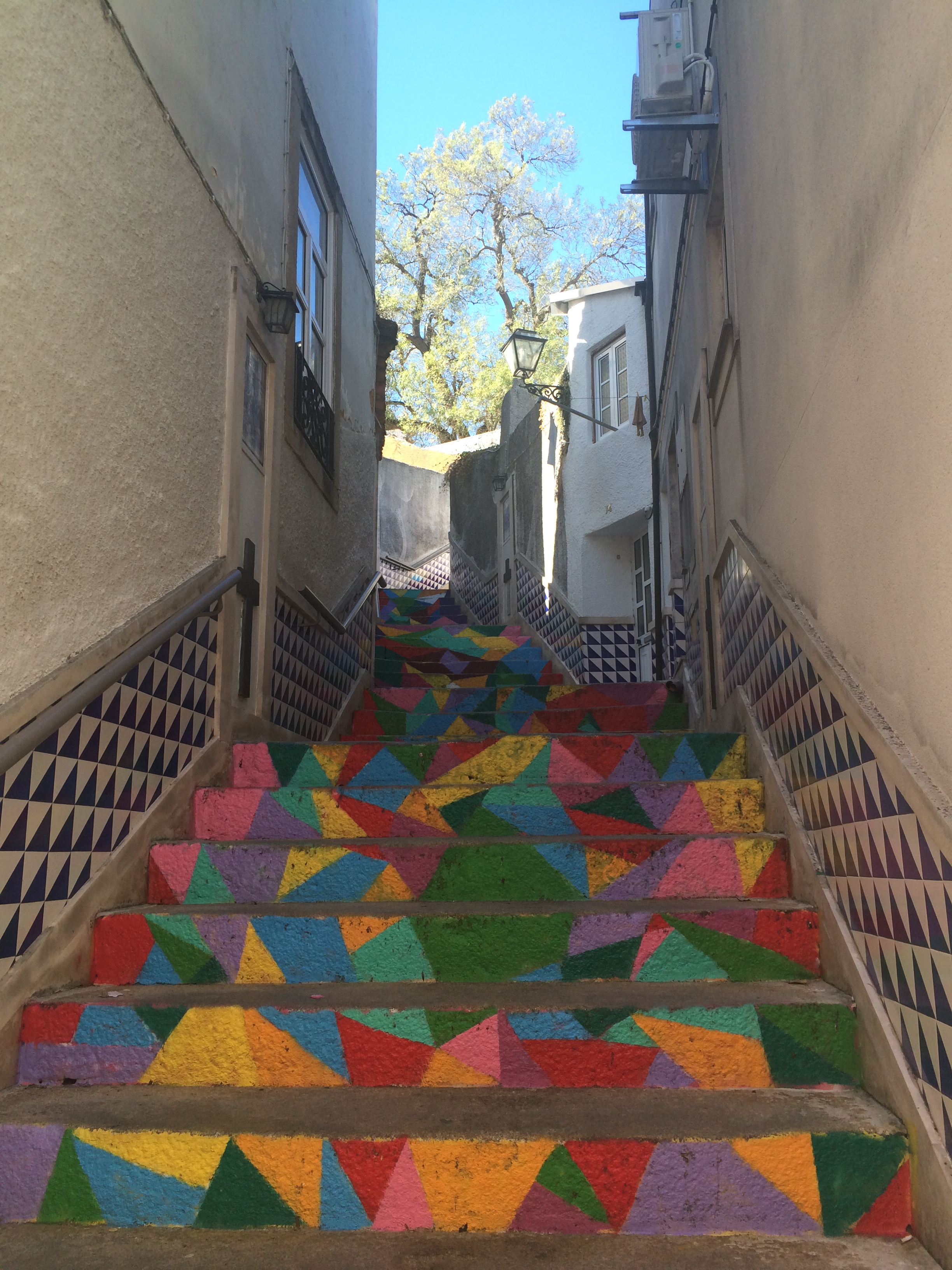 I know nothing about architecture, except that sometimes when I walk by certain buildings, I stop and stare. I did a ton of that in Portugal. Outside. 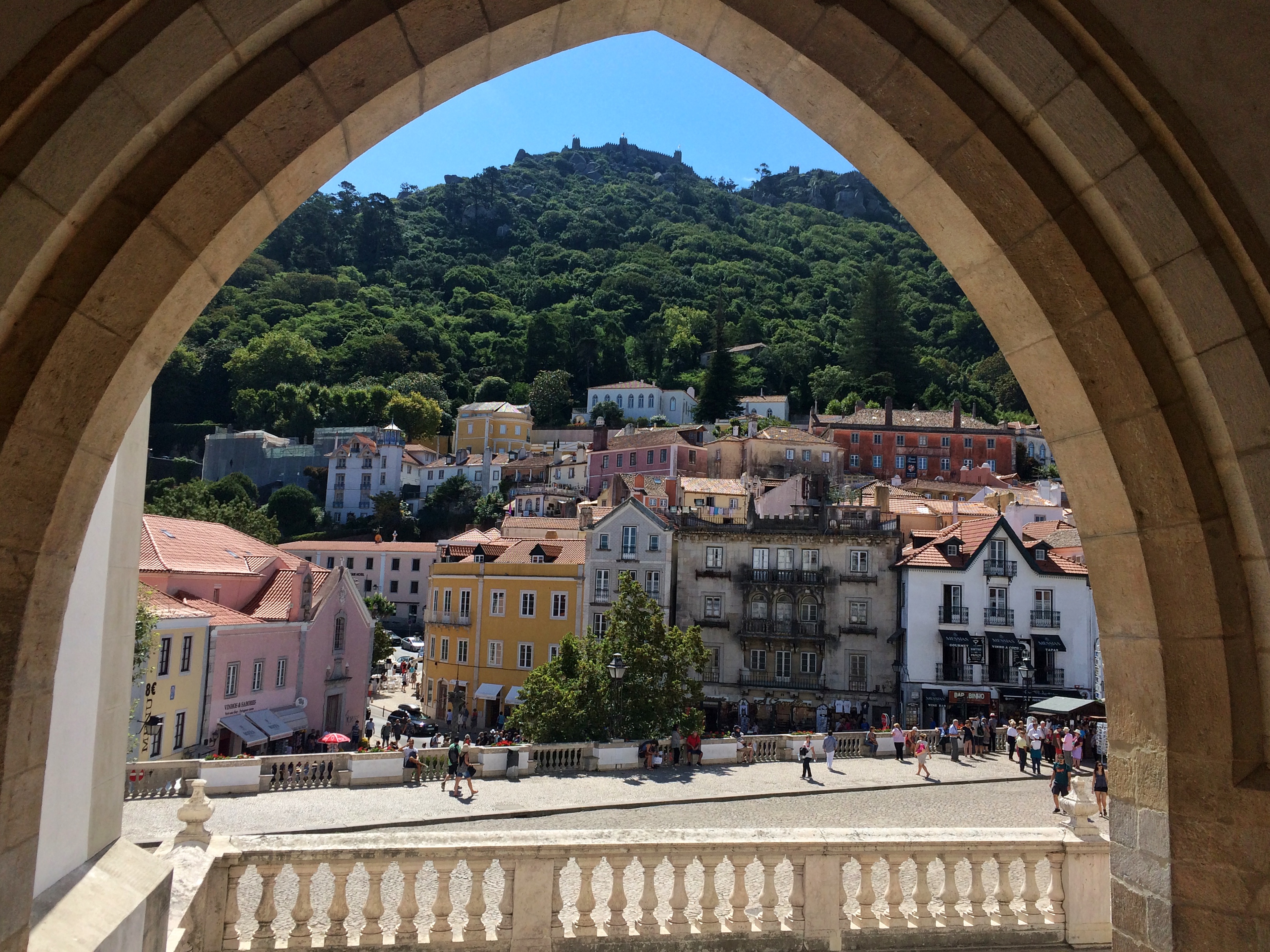 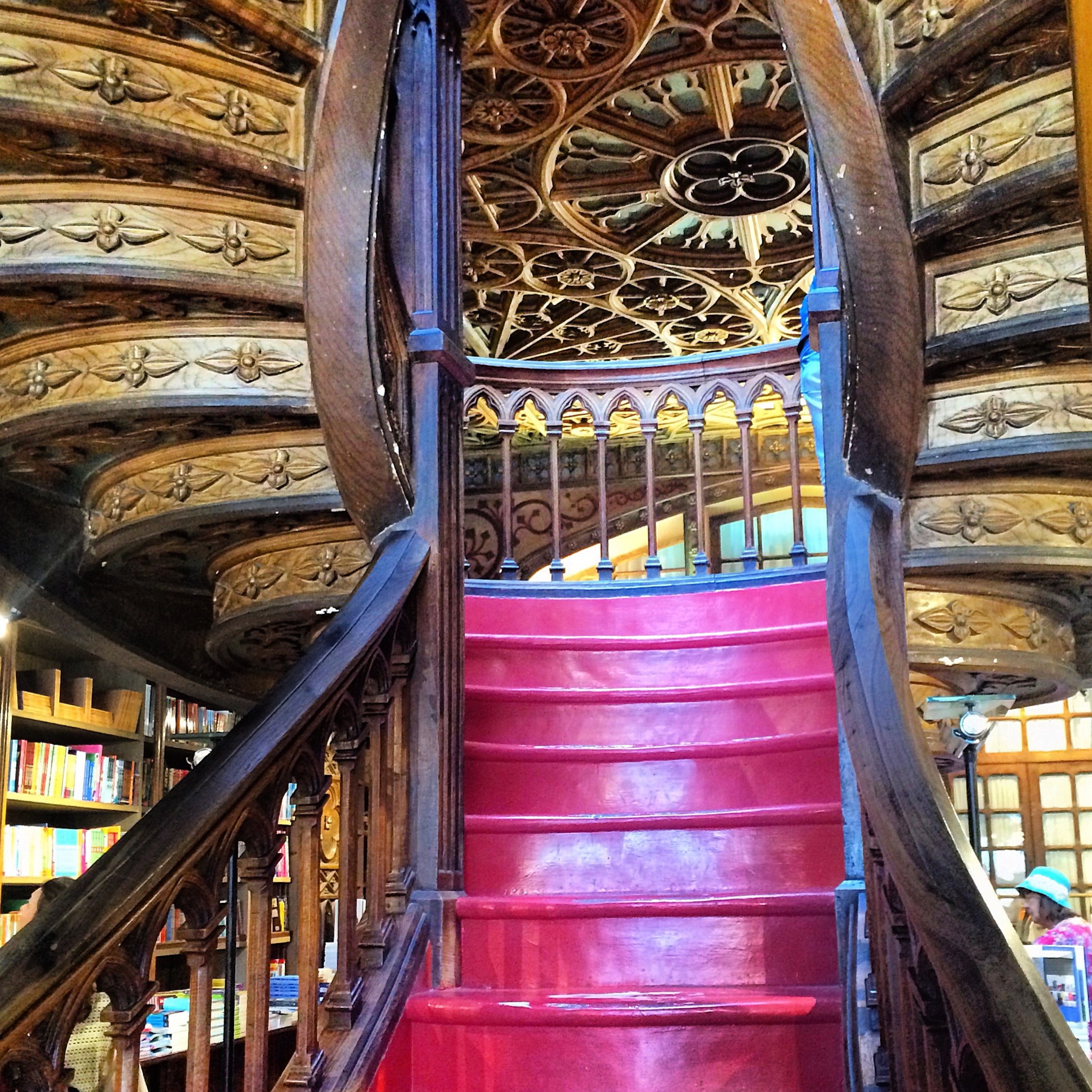 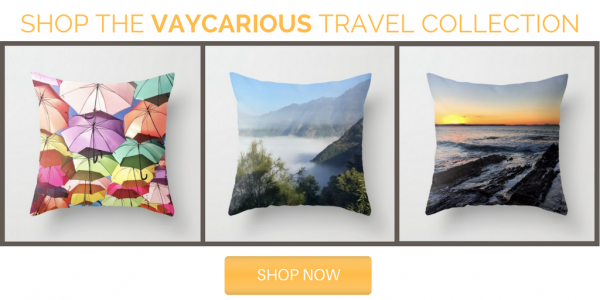 You know how when you’re traveling to someplace new and you suddenly realize just how old the place is? And how many generations of people have stood right where you’re standing? That feeling really struck me in Portugal. I’d recently been to Australia where everything looks so new. You can tell that the cities were built for driving, not walking.  That’s not the case in Portugal.

The cities are full of tiny alleyways that end at churches and outdoor cafes. 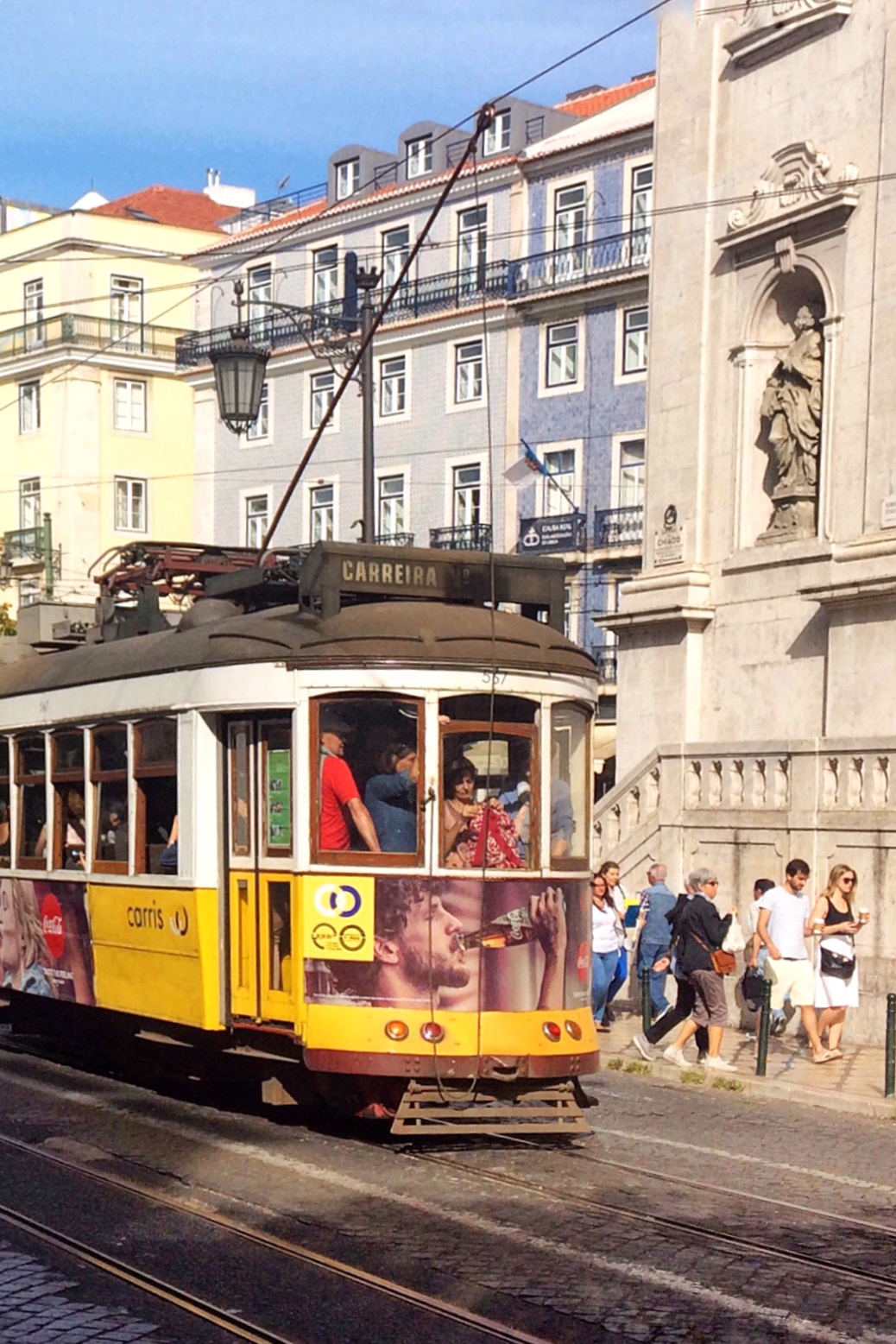 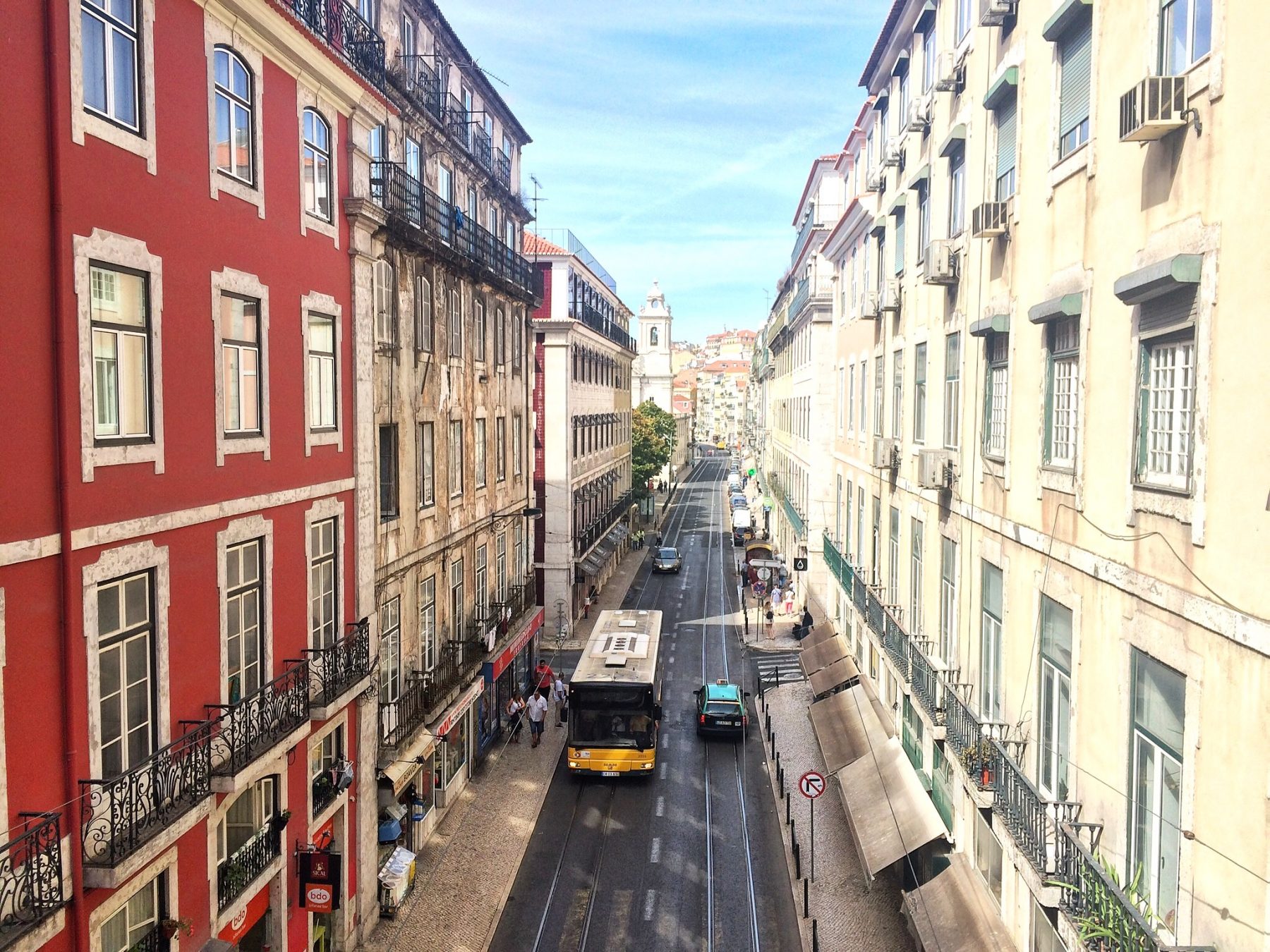 And when you walk down that alley, you might find a cafe where the Port wine is free and musicians are singing Fado. 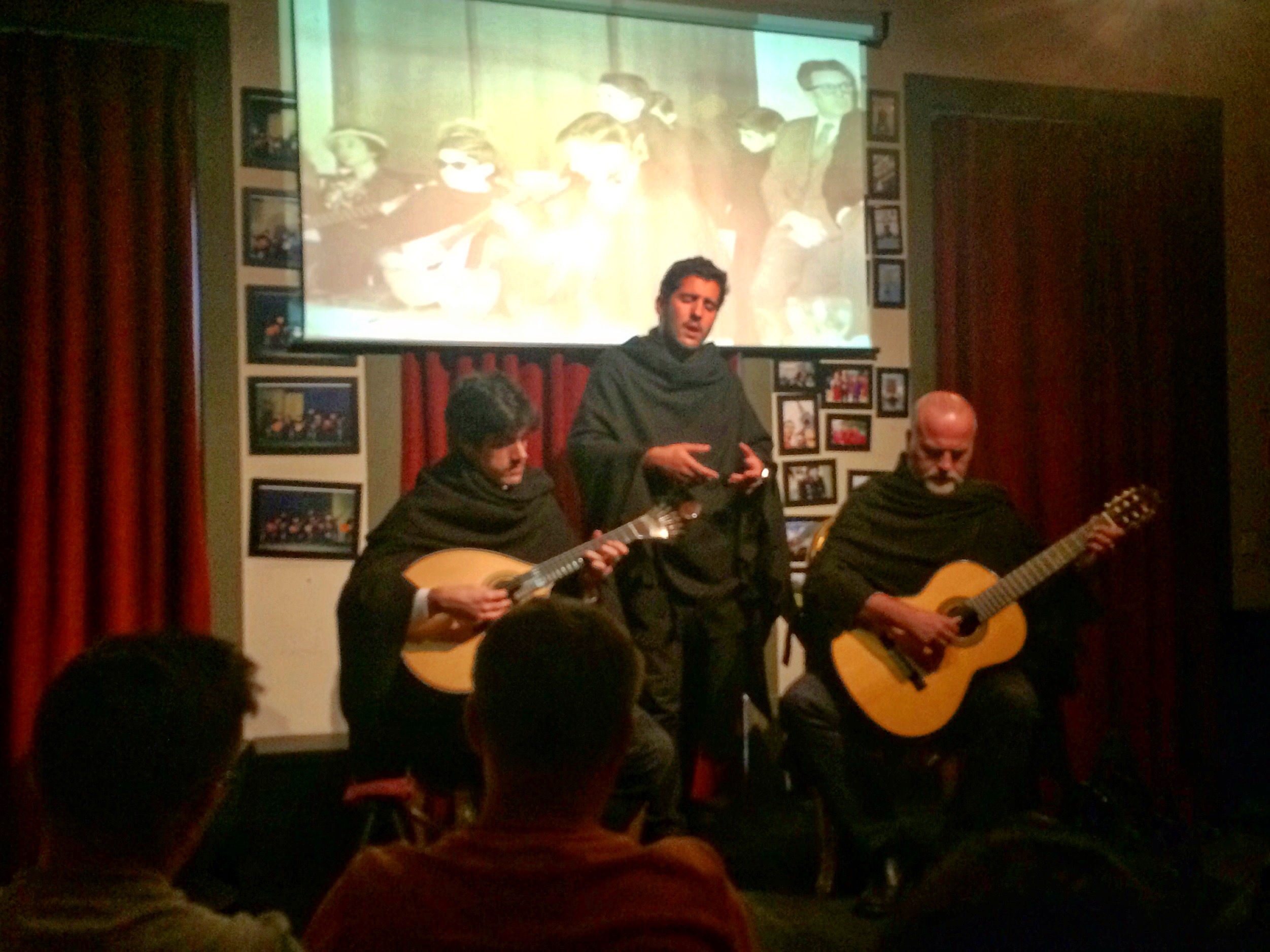 Coimbra was Portugal’s original capital, and University of Coimbra is the second oldest university in the world. Coimbria students have been wearing black capes as part of their uniform since the 16th century. It looks pretty cool when you’re on campus people-watching, but I’ll admit it’s a little terrifying when you’re walking down the street late at night and you run into a pack of caped kids. 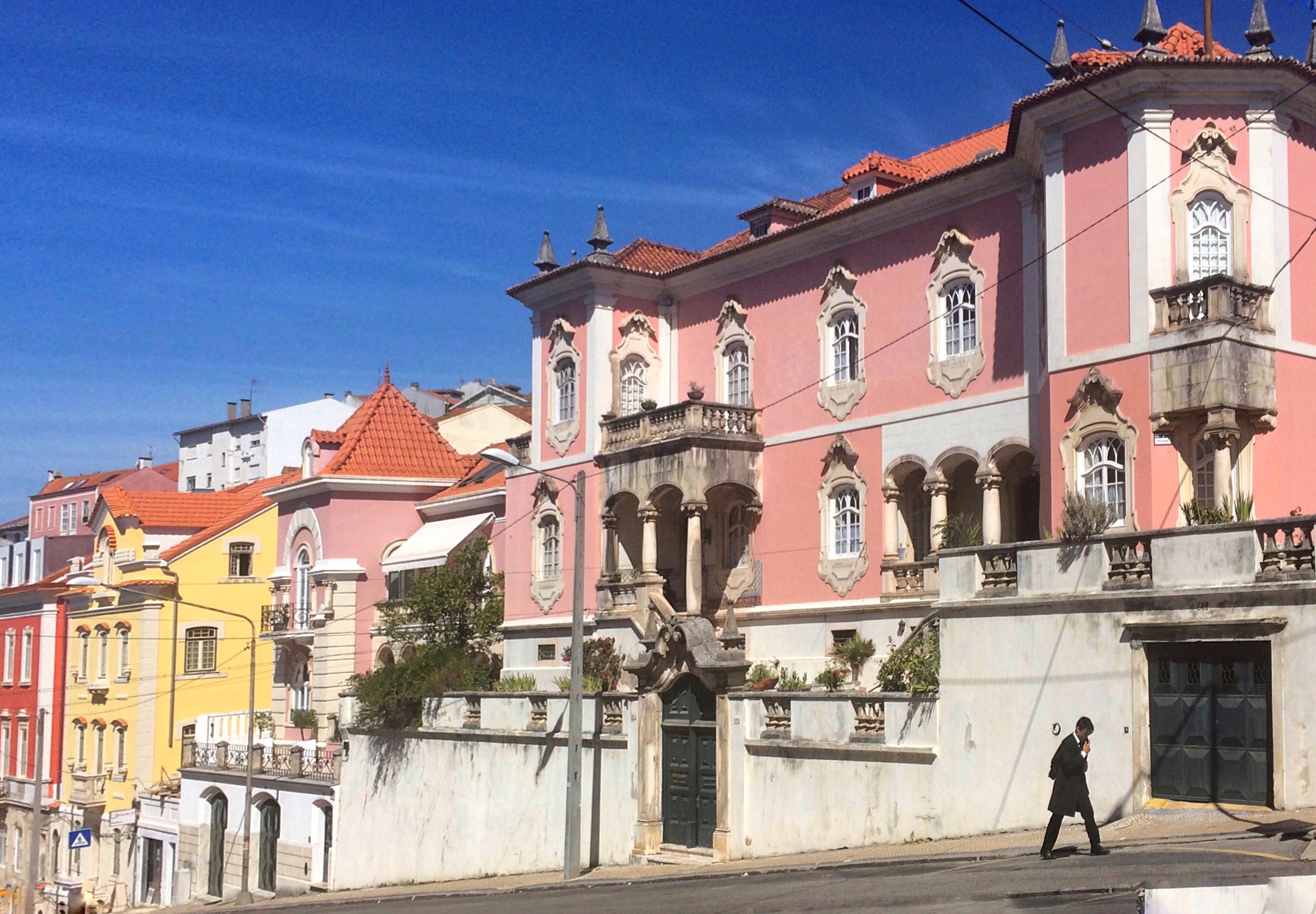 5. Trains in Portugal are Affordable and Convenient.

I took a two-hour train once from Wilmington, DE to New York City. It cost me $56. Yuck. A two hour train trip from Lisbon to Porto is around $20. With WIFI.

Or you could probably fly for about that much before the baggage fee.

Travel Buddy Tip: I don’t pay airline baggage fees. My favorite travel hack is using packing cubes so I travel with carry-on luggage only. They compress your clothes to fit into a smaller bag. Get these, and you’ll thank me later. Preferably with some pasteis de nata.

Transportation in Portugal is so cheap that I went to Coimbra just to see a fancy old library. And they didn’t even allow pictures. You know that’s not like me as a picture-loving cheapskate. Whether you’re looking to spend your holiday exploring one city or the whole country, Portugal’s easy to get around. 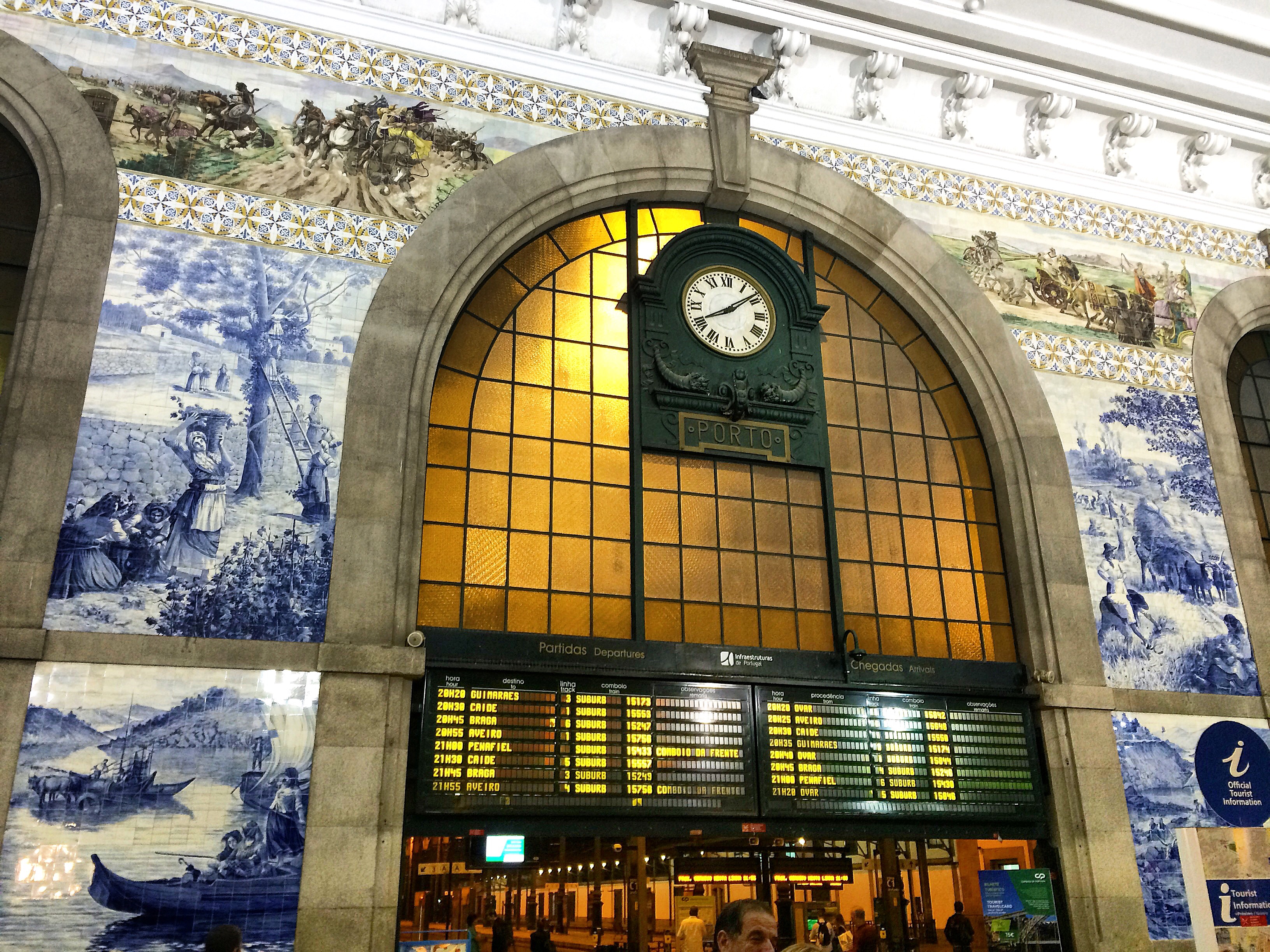 Find out how to not lose money on airline ticket changes.

Second most common question I get asked: “Do they like Black people in Portugal?”

I didn’t stand out in Portugal like I did in Southeast Asia, because there are Black Portuguese people. In fact, it’s the first non-English speaking place I’ve been to where people assumed I was a local and spoke their language. Important note: I do not.  I didn’t have any conversation on race with anyone to get the low-down on life in Portugal for Black people. But I never felt mistreated. And my Tinder matches were constantly buzzing. So I’ll call that a “Yes.*”

Alright, so again I took the long-winded way of saying things. But I think Portugal is EVERYTHING!

I know you’ll love it too. Now go ahead and save this post on Pinterest for later. I hope you’ll need it soon! 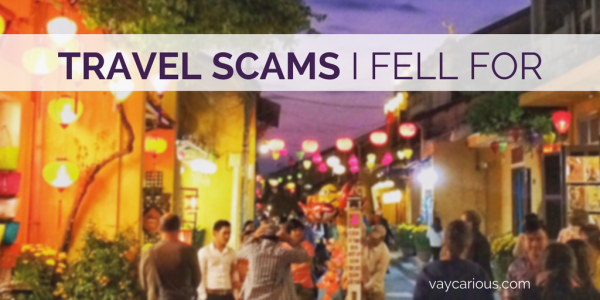 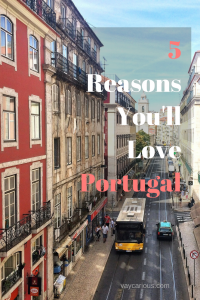 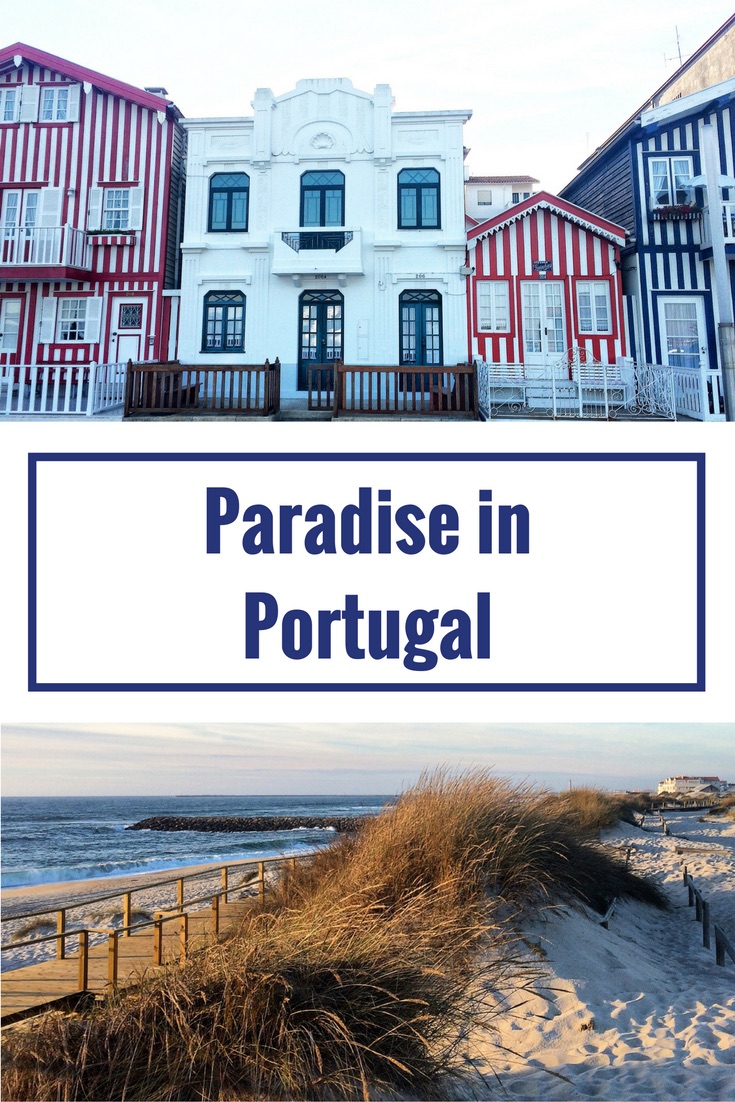 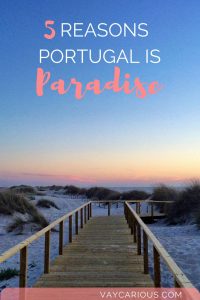 Tell me if Portugal fits the priorities on your travel destination checklist. 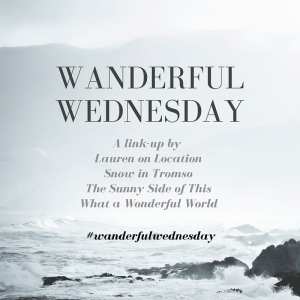 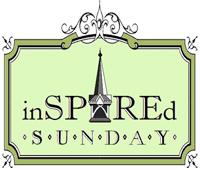